Want to read about the little boys arrival? Head to – Graduated: Labour and Delivery

Everyone in that labour and delivery room made me feel like the hard part was supposed to be over. They were here and they were going to be ok. But the keyword was “going”. I still wasn’t quite sure what was in store for me as one part of our journey had ended and another began. I just knew we had a long way to go.

As I lay in bed awaiting the moment where I could be taken up to see them, I found myself asking, was I prepared for how fragile and small they would seem? An hour and a half later, I could answer that question. No one would ever be prepared.

Caleb met my mom and I and we all went up to the NICU together, buzzing with excitement. This was soon met with disappointment as they informed us that because of a terrible flu season, visitors were restricted to parents only. Not a happy start…

I could do my best to describe what it was like to meet my two perfect (albeit-too small) babies for the first time, but I could never do that justice. So here are a couple of videos that I hope will portray it a little better…

They seemed so helpless and alone. Separated from me and separated from each other, it was definitely more than I could bear. But, as we all do, we stop wanting to feel like the victim and attempt to become numb to our circumstance.

For the next week, Henry and Ethan were in what they call Level III Care – which is capable of caring for the smallest and sickest of babies. They were little heroes, everything we were being told were all things “routine” for premature babies like them.

They both had to have a lumbar puncture performed (where they remove and test a bit of spinal fluid)  to test for an infection of meningitis, since they weren’t sure why I had gone into labour. Thankfully, no signs of infection were detected (small victory!). They were given a round of antibiotics for good measure, and I stayed in the hospital an extra day for monitoring. Henry had a UV line (that went through his belly button) put in because his veins were too small for an IV and Ethan was able to have an IV for the first couple of days, but they ended up needing to poke him so often that they put a central line, a PICC, in through a vein in his arm.

Ethan had experienced severe bruising on his left leg because of his delivery (the doctor had grabbed onto his leg to help bring him down and deliver him). On the third day of his NICU stay it looked so awful that they actually performed an x-ray on his leg to rule out any small fractures. His leg was fine (small victory!). The bruising healed slowly.

Both babies started on a cPAP machine and neither of them ever had to be on a ventilator (small victory!). The cPAP machine delivers air to their lungs through the tubes you see resting on their nose. They were essentially breathing on their own, but the cPAP machine offered an extra bit of pressure to help prevent a lung from collapsing  after a breath. A ventilator, by contrast, does all of the work for the baby through a tube inserted down into their windpipe. Their lungs are the last to develop before birth and I was actually given 2 doses of steroid to help speed up development and prepare their lungs.

The majority of their week in level III care was spent under phototherapy lights (to prevent jaundice). Both had crazy bouncing up and down bilirubin levels. It was hardest to see them under these lights, for some reason it made them look more vulnerable and sickly. I would celebrate inside every time I would come in and the lights would be off.

They both had their strengths and weaknesses. It seemed as though Henry was my strong eater in the beginning while Ethan was my strong breather. Henry suffered from apnea and bradycardia in which his breathing would stop, his heart rate would dip, and then he’d start his breathing again. To help with that, he was given a daily dose of caffeine – his morning coffee, the nurses would call it. Ethan suffered from reflux, where his food would come back up into his esophagus rather than digesting. Ethan eventually started adjusting to his feedings.

Henry and Ethan had quite the tour around the NICU unit. The NICU was constantly full, which meant there were babies constantly coming and going, an extremely busy place, which included a lot of shuffling. They started out in two separate “pods” (the NICU was sectioned off into different pods labeled A through D, each pod held approx. 10 babies). Then they moved in across the hall from each other and we got to do this (small victory!):

This set up lasted 2 days before they were moved across the NICU and started sharing a room. Like this: 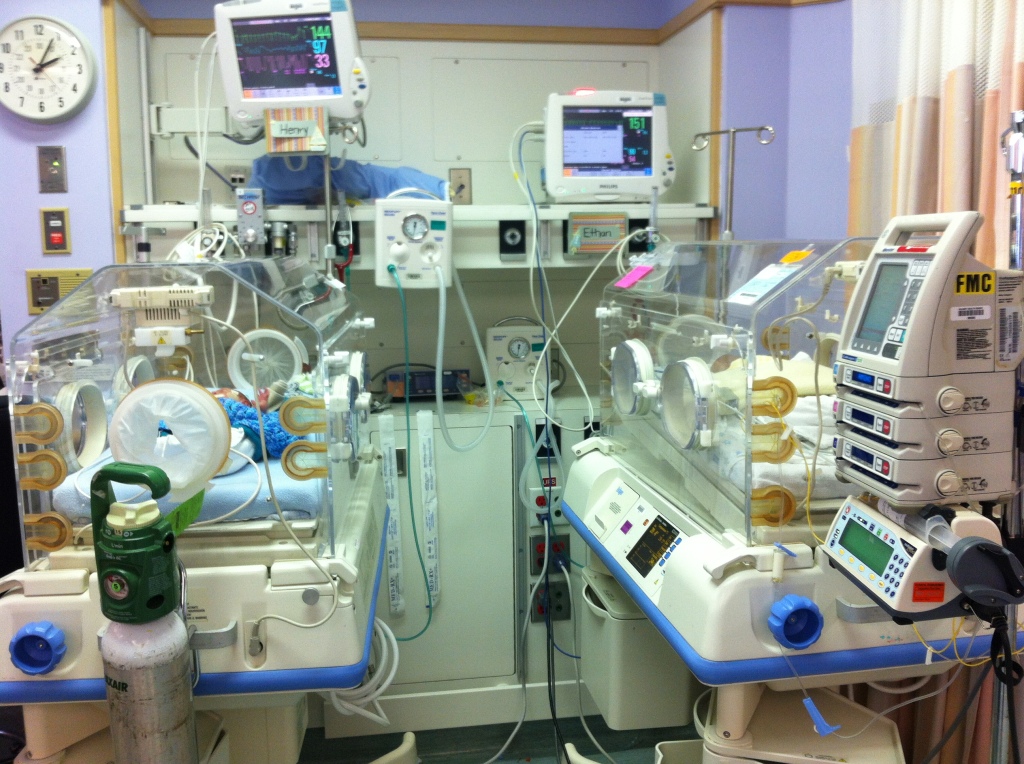 It was right before this move that they were able to come off the cPAP machines. They both came off at the same time, with the nurse preparing me that very often, almost always, they come off the cPAP and then return back onto the cPAP because they aren’t quite ready yet. We were lucky (another small victory!). They moved from the cPAP to a nasal cannula and it was only a day later and they were off completely, breathing on their own.

After a week in the NICU, it is routine for babies born before 30 weeks to have a head ultrasound performed. Premature babies brains are not fully developed and as a result, the blood vessels are very fragile and prone to breaking. It was discovered that both my babies had a Grade 1 Intraventricular Hemorrhage  (or IVH). This is the smallest and least severe of brain bleeds, and the doctors assured me that the bleeding they had seen in the ultrasound had been so slight, he had no doubt that it would resolve itself (really… a small victory!). They were to have a follow-up head ultrasound in a week to check on the bleeding.

Almost in the same breath, the doctor explained to me that my boys were graduating. After 8 days, they no longer needed level III care and they would need to be moved to another hospital, to offer up their level III space for other babies in need…